This team carries the Modeling activity of the Health Group.

The invasive aspect of gliomas makes them incurable and despite technical progress over the last twenty years, the life expectancy of patients has changed relatively little. Modeling is an original approach, which, by integrating in a formal framework the main phenomena involved at different scales (in particular that of the cell in biology and that of the tissue in medicine) in the evolution of these tumors, makes it possible to better understand and predict their evolution. Moreover, biology offers, by its intrinsic non-equilibrium character, original and interesting problems for modeling and statistical physics. The work of the team includes a part of data production and analysis (image analysis for example) and a part of model building and confrontation with the data. 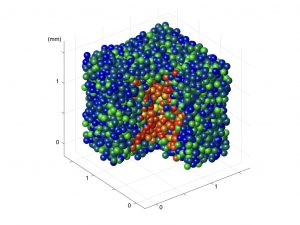 Growth of a glioma (orange and red cells) in a population of normal cells (green and blue cells) (from: Dufour A, Gontran E, Deroulers C, Varlet P, Pallud J, Grammaticos B, Badoual M (2018), Modeling the dynamics of oligodendrocyte precursor cells and the genesis of gliomas, PLoS Comput Biol, 14, e1005977). 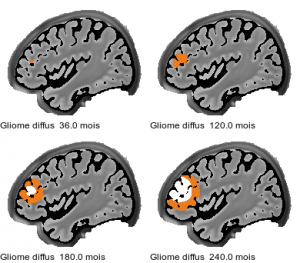 Modeling of the growth of a glioma. The tumor appears in brown (low cell density) and white (high cell density), at different times.